Engineering is a popular and challenging profession that requires creativity and intense logical thinking to generate solutions to societal problems. This will require the engineer to apply new ideas and techniques with the goal of making the world a better place to live. 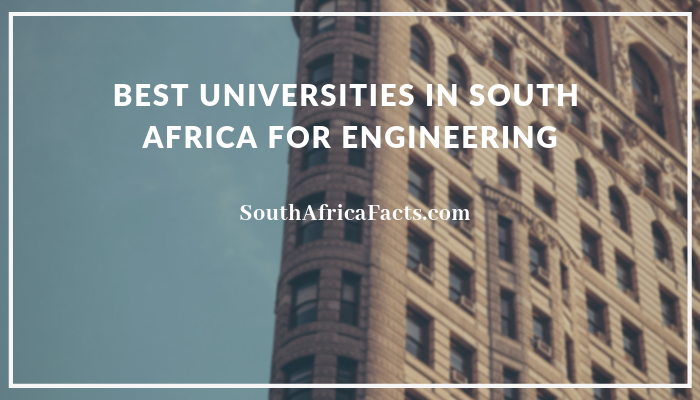 Although there are several universities in South Africa, they’re not all the same as they have courses they shine brightly in. If you want to learn about engineering with full assurance that you’re getting the most qualitative education possible, consider applying to any of these universities below which are renowned to be top performers in engineering courses.

The University of Pretoria has consistently taken the first position in many courses in Africa with a few upsets from other universities. It was established as a public university on March 4, 1908 and has since been a great place to study engineering.

Its Faculty of Engineering, Built Environment & IT has the following offerings: Bio Systems, Civil, Chemical, Electronic, Computer Engineering and many others. It has a large population of students estimated to be around 26,000 who have come from several African countries to learn the nitty-gritty of engineering.

Its School of Engineering offers students specialization in the following areas: Land Surveying, Civil, Electronic, Electrical, Computer, Agricultural, Chemical and Mechanical Engineering. The institution has a large student population of more than 30,000 students enrolled in it.

Available courses in its Faculty of Engineering and Built Environment include Electrical and Information Engineering, Environmental Engineering, Biomedical Engineering, Computational Sciences and many others. In addition, the university also boasts industrial links to deepen the students’ experience in their course of study.

The Faculty of Engineering and Built Environment of the university offers the following engineering courses Chemical, Civil, Electrical and Mechanical Engineering as well as Architecture, Planning and Geomatics among others. The University of Cape Town is the oldest tertiary education institution in Sub-Saharan Africa, hosting over 26,000 students from around the world.

This prestige institute was founded in 1866 but received its full university status in 1918, making it one of the oldest universities in South Africa. Located in a town in the Western Cape province of South Africa, the public research-based institution is renowned for its contributions to the body of research.

One of its prominent contributions is creating Africa’s first microsatellite, SUNSAT, which was launched in 1999. The Faculty of Engineering of the university, which was established in 1944, offers Civil, Electrical & Electronic, Process and Mechanical & Mechatronic Engineering. About 3,400 students are enrolled in the faculty at any given time.

The history of this university dates as far back as 1873 when it was established. Formerly known as the University of Cape of Good Hope, the University of South Africa is the largest university in the country and Africa as a whole with hundreds of thousands of enrolled students.

Its School of Engineering consists of several departments such as Electrical, Mining, Civil, Mechanical and Engineering and many others.

Situated in Pretoria in South Africa, the University of Johannesburg is a public university established in 2005 as a merger of three institutions. It is also one of the largest residential universities in the country with a student population of over 50,000.

One of the best in South African Universities, the university’s Faculty of Engineering and the Built Environment awards degrees in the following courses: Quantity surveying, Metallurgy, Mining, Civil, Mechanical, Electrical and Electronic and several others.

Rhodes University, which is located in Grahamstown in Eastern Cape Province, is another great place to study engineering. The institution was founded in 1904 and was a constituent college of the University of South Africa until 1951 when it received full university status.

It offers the following engineering courses: Chemical, Civil, Mechanical, Electrical and Electronic engineering, Computational Sciences alongside other areas of specialization. The school attracts international students who make up its 8,000 student population

University of the Free State (UFS)

The institution has garnered international reviews due to its academic excellence. Prospective students can apply to study any of the following engineering courses: mechanical, civil, chemical, electrical and electronic engineering and quantity surveying among others.

North-West University was established in 2004 by a merger of two universities, resulting in one of the largest universities in South Africa with over 64,000 student population. The school has a glowing reputation and tries to do anything to maintain its position on ranking tables by striving to be a training hub for versatile, innovative and high-quality engineers.