Accounting is one of the most relevant courses in the world today since every industry needs an accountant. Beyond crunching numbers, business and governments need accountants to analyse and interpret the figures for decision making. While this means the profession will be around for a long time, it also implies that it’s a tasking profession.

For this reason, getting a degree in accountancy is of utmost importance but where you obtain the degree matters. You want to be sure you’re being well prepared for challenges in the real world and equipped with all the skills you need. 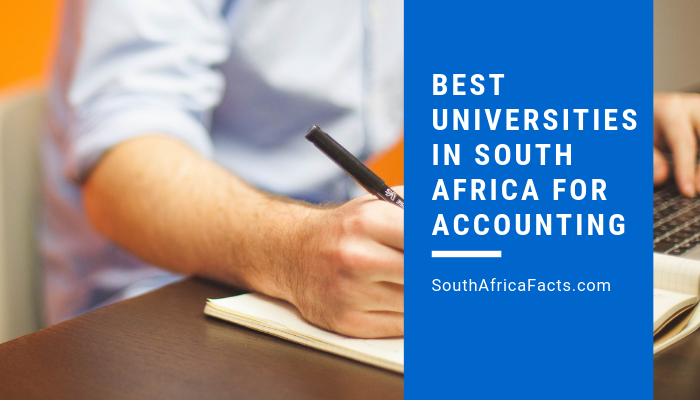 South Africa is home to some of the best universities in Africa, little wonder why it attracts many international students. If you’re looking to study accountancy, here’s a list of the 10 best accounting universities in South Africa you should consider.

Located on the slopes of the Devil’s Peak at Table Mountain, the University of Cape Town (known as UTC for short) is one of the top rated universities in accounting. It is widely recognised for the significant role it played during the fight against racial discrimination and today, over 50% of students in UTC residents are black.

Its College of Accounting is considered to be the best in the country due to its determination to be a centre of excellence in professional and accounting education. The curriculum is designed to put out graduates with technical skills across corporate governance and assurance, taxation, financial reporting and several other areas of specialization.

The University of Pretoria puts up a good showing on the ranking for accounting, a proof that it’s one of the best in the country. Situated in Hatfield in Pretoria, the institution was founded in 1908 as a research-intensive university and it hosts a significant number of students from other African countries.

The Department of Accounting of the institution is one of the largest residential departments and also boasts highly qualified personnel and strong research links which is crucial towards producing accounting professionals that can make valuable inputs in the real world.

The University of Witwatersrand is a prestigious university in South Africa with its origin dating as far back as 1896. More commonly known as Wits University, the institution holds a top spot in the country’s and Africa’s ranking annually, and it’s no different this time.

Based in Johannesburg, its School of Accountancy puts a strong emphasis on delivering the highest standard of education in preparation for the real world of work. It prides itself as a school that produces competent, professional accountants and being the leading contributor of black accountants to the South African business landscape.

Situated in the Western Cape province of South Africa which is a vantage location due to its proximity to government departments, Stellenbosch University sits at the fourth position of the list. It hosts more than 30,000 students including 4,000 international students.

Its Department of Accountancy which recently became the School of Accountancy specialises in training professional accountants in accordance with global standards. The lecturers in the department consist of full-time personnel of the university and experts in the accounting profession for dynamic learning.

Rhodes University is a 115-year old academic institution located in Grahamstown in the Eastern Cape Province of South Africa. The university takes pride in having outstanding postgraduate success rates as well as the best research output per academic staff member.

Its Department of Accounting aims to equip students with professional competence to be responsible and responsive leaders and to be able to apply sound business judgement with a firm grasp of professional ethics.

The school offers diverse accounting courses with the aim of producing professionals that can compete favourably in the world as well as display a firm grasp of accounting principles and ethics wherever they find themselves.

University of the Western Cape

Established in 1959, the University of the Western Cape (UWC) gained prominence during the struggle against racial discrimination in South Africa. It is located in the Bellville suburb of Cape Town and is sparsely populated by students from several African countries.

UWC has also established strong relationships with other universities in South Africa and beyond, a partnership that has improved the quality of education delivered to students. Its Department of Accounting boasts a curriculum that boosts research, training and development of professional accountants in all accounting fields.

The University of South Africa (also known as UNISA) is one of the oldest universities in South Africa as it was founded in 1873. More importantly, it is the largest university in the country and Africa as a whole, hosting over 300,000 students with a significant number of international students drawn from 130 countries across the world.

Its Department of Accounting helps students acquire relevant skillset like communication, teamwork, reporting and analytical skills alongside knowledge of their desired specialization of accounting.

Coming to another young university on the list, the University of Johannesburg was formed by a merger of Rand Afrikaans University, Technikon Witwatersrand and parts of Vista University, giving it a large student population of over 50,000 students. This figure includes the over 3,000 international students from over 80 countries which makes it one of the top multicultural universities in the country.

Its Department of Accountancy prides in being the biggest provider of black chartered accountants in South Africa and aims to transform accountancy in the country by producing competent professionals in all fields.

University of the Free State

The University of the Free State is another great place to study accountancy. It was founded way back in 1904 and is situated in Bloemfontein in the Province of the Free State, where it hosts over 39,000 students.

Its School of Accountancy offers the following areas of specialization: financial accounting, auditing, taxation, computer application/controls and Management Accounting and Financial Management. The school is one of only six universities in South Africa to receive a “1” grading by the South African Institute of Chartered Accountants (SAICA).