South Africa has 17 law schools, which comprise some of the best law schools in Africa. Some of these schools have been around for a long time, indicating that they have a long-standing heritage that is an invaluable edge over relatively new schools (in most cases). This is evident by their positions in several rankings.

For example, the QS World Rankings by Subject has six African universities in their top 500 institutions for Law and five of these are South African. It shows that the quality of the law schools in South Africa offers the best education you can get in Africa. 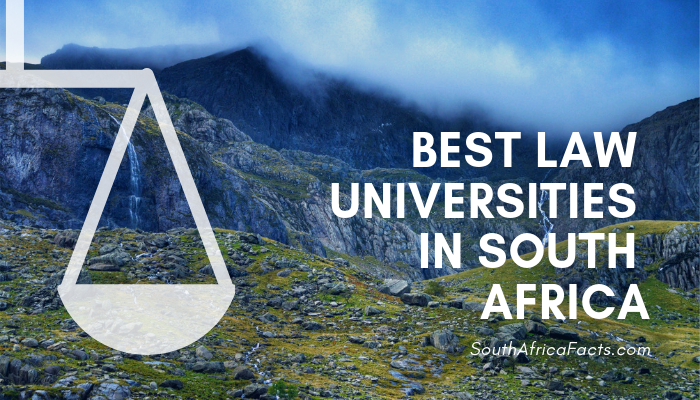 Without further delay, let’s delve into the list of the 10 best law universities in South Africa.

Also known as UTC, the University of Cape Town has consistently been ranked number one among top universities (by subjects and overall) in South Africa. It was established in 1829 and is the oldest university in the country.

Although the institution’s Faculty of Law is the smallest in the institution with close to a 1,000 students, it has a rich history of producing skilled legal professionals that have participated in the process of maintaining and strengthening an open, free and democratic continent. The school has law students from other African countries like Nigeria, Kenya, Uganda, and Tanzania to mention a few due to its high standard of legal education.

Its School of Law aims to deliver innovative and transformative research while training its students to use legal materials effectively. The school is known for its academic excellence which explains how it has raised renowned legal luminaries across the continent.

One of the largest and oldest South African higher education institutions (founded in 1908), the University of Pretoria (UP) has consistently made it to the top three universities in Africa in many subjects.

Its student population comprises nationals from other African countries while its Faculty of Law is currently ranked 76th under the top 80 Schools of Law globally. It prides itself as a recognised leader in socially relevant legal research and education, both in South Africa and in the world.

Moving to the Western Cape Province, Stellenbosch University is a university rooted in Africa but global in its reach. In its over 100 years of existence, the institution has garnered many local and international awards for its qualitative research and teaching standards, making it one of the best universities to study law in South Africa.

Its Faculty of Law is focused on raising world-class legal practitioners by equipping its students with knowledge and relevant tools necessary to excel in the profession. It also has one of the largest law libraries in Africa which will prove extremely useful to its multicultural student population.

The University of Johannesburg is one of the youngest universities in South Africa, only because it was formed by a merger in 2005. The institution which opened its doors the same year it was merged has worked hard to put up an impressive academic performance that has given it global recognition.

It is one of the primary reasons why the university is heavily populated with more than 50,000 students of which 3,000 are international students. Its Faculty of Law is known for its track record of raising legal experts in specialised areas like tax law, criminal justice and forensic investigation, insolvency law and several others.

Another young South African university on the list, the University of KwaZulu-Natal was established in 2004 from the merger of Durban-Westville and the University of Natal. It’s prominently known for its outstanding excellence in health science courses and law.

Its School of Law is one of the largest contact Law Schools in South Africa, with a strong emphasis on skills development within the LLB – particularly professional, legal and general skills.

Heading to the town of Grahamstown in Eastern Cape Province where the next institution is located, Rhodes University is another great place to study law in South Africa. The institution enjoys the distinction of having one of the best undergraduate pass and graduation rates in the country. It is also populated by students from across Africa.

University of the Western Cape

Established in 1904, the University of the Western Cape has risen steadily in rankings to become one of South Africa’s top higher education institutions. It played a notable role in the fight against racial discrimination.

Its Faculty of Law is recognised for its dedication to a culture of human rights and constitutionalism as well as its rigorous and relevant legal education. The university has one of the most diverse student populations in the country.

University of the Free State

Boasting a student population of more than 31,000 students, the University of the Free State is internationally recognised for its academic excellence and innovative ways of teaching. Its Faculty of Law (located in Bloemfontein) offers legal education that comprises a mix of theory and exposure to the practice of law in the lower and higher division of the courts.

The tenth university on our list of the 10 best law universities in South Africa is North-West University. Formed by a merger of two universities in 2004, the institution has a high student population of over 68,000 students of which a significant number are nationals of other African countries.

The Faculty of Law of the institution is known for offering quality legal education and focused research towards expanding the frontiers of knowledge. North-West University is one of the best places to obtain a law degree as the Faculty aims to equip its students with knowledge, ethics and skills that are necessary for a sterling career in law.