Toys are what kids love the most. Watching a child in a toystore get engaged will convince you of this. And the best of them can engage a baby’s senses and spark their imaginations. Toys can also encourage kids to interact with others. New shapes, colors, textures, and taste are learning experiences for children.

As babies become toddlers they can play with a wider variety of toys. Babies may still enjoy some of the toys they played with as babies. Lego blocks can teach them about color and shapes while improving their motor skills.

At preschool and school-age, children can begin relating to letters, numbers and language skills by engaging with toys that encourage this type of learning.

Children can also bond with parents, learn and have fun when they play with educational toys. A child can retain the things they learn in a fun and enjoyable way when they interact with toys.

This is one of the motivations of Fisher-Price. This driving force has put them at the top of the ladder when toys are considered. 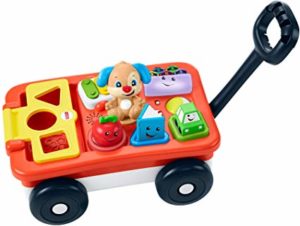 Prices of Fisher-Price in South Africa

The table below shows the prices of select Fisher-Price toys in South Africa.

A brief history of Fisher-Price

Fisher-Price was founded because Herm Fisher thought that the world needed better toys. According to him, “the world needed toys that appeal to the imagination, that do something new and surprising and funny.”

It was founded in 1930 when Herm Fisher joined forces with Irving Price, Price’s illustrator-artist wife Margaret Evans Price, and Helen Schelle to start the first line of toys which was called “16 hopefuls”. This line of toys included a couple of darling docs.

Since then, Fisher-Price has kept the original vision of its founders in mind. One of the remarkable introductions of Fisher-Price’s baby gear. The baby gear includes all the beautiful stuff that makes baby showers worth having. Fisher-Price also adds comfort, security, and convenience to the lives of new parents and babies.

In 1931, Fisher-Price started a new line of push, pull and floor toys—Dr. Doodle and Granny Doodle. Shortly in the same year, the first shipments of Fisher-Price toys were shipped to New York’s Macy’s.

Between 1934 and 1941, Fisher-Price reached new milestones by producing the well-known Snoopy Sniffer and the Coaster Boy pull toys.

After a decade of business, Fisher-Price suspended toy making during the war for the duration of World War II. This was because their entire plant was required for manufacturing aircraft parts, ship fenders, and medical supply chests. The staff of Fisher-Price were the helm of these manufacturers.

After the war in 1950, a lot of houses were needed when veterans returned home trying to establish a quiet domestic life. This rush created a housing boom and wood became scarce. This resulted in a shortage of supply of wood and consequently forced Fisher-Price engineers to look for other materials. This improvisation played a huge role in the discovery of plastic. The first successful plastic made Fisher-Price toy was the Buzzy Bee.

1952 ushered in a new rave in their doggy pull toys for kids who were just learning to walk. This rave made the Snoopy Sniffer a hit. A series of string-pulled wooded toys that bob their heads when you tug at them but the Snoopy Sniffer was the most popular of them all.

Fisher-Price has produced over 5,000 different toys since inception. Let us look at other notable milestones and memorable Fisher-Price fun toys:

We have shown you a lot you about Fisher-Price, its founders and interesting facts. Also, this article has presented to you the various prices of a few of Fisher-Price products.