South Africa is home to some of the best rappers on the continent who have won many fans across the continent through their talent. Some of these rap stars don’t just release singles and albums; they also hold concerts and tours in other African countries and even in Europe.

If you’re looking for the top South African rappers to follow, look no further as we have compiled a list to that effect. It takes into consideration factors like buzz, impact, style, lyrics and so on. Without further ado, let’s dive into the topic proper. 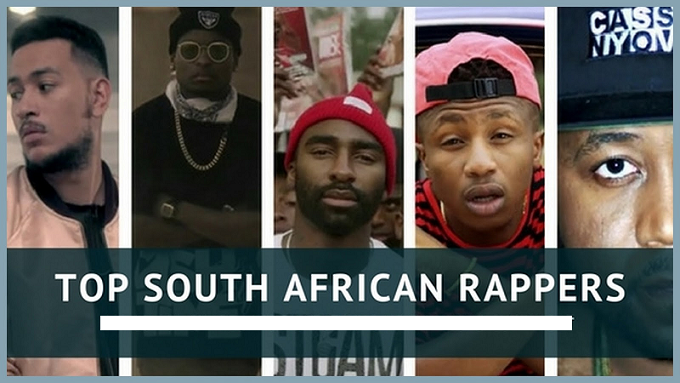 Nsikayesizwe David Junior Ngcobo better known as Nasty C is one of the most famous rappers in South Africa right now due to many hits songs and singles he has to his name.

He made his first shot at music in 2012 when he released a mixtape entitled “One Kid a Thousand Coffins” and has steadily risen in fame to become the favourite of many rap lovers. He is the recipient of several awards including Metro FM’s Best New Artist, Song of the year and Best Hip Hop Album. Arguably, he leads on the list of the top South African rappers.

Cassper has done nothing but thrilled us with good rap music over the years leading to heaps of hits and collaborations. He has dominated the South African music industry and stretched his fame to other countries, making his seeming sudden rise to stardom phenomenal.

He broke into limelight when he released his debut studio album, “Tsholofelo”, in 2014 and has since released three other albums. He has successfully hosted concerts including “Fill Up The Dome” and several others in South African stadiums. He’s also taken his music to the global scene, especially with the rap shows in the United Kingdom.

Following closely on the list is Kiernan Jarryd Forbes who is commonly known as AKA. He is a South African hip hop artist, record producer and businessman who rose to stardom in 2011 and is now known for his well-thought-out music.

He amassed several achievements in the industry which earns him the rank of one of South Africa’s line of rappers and some of these include his wins at the AFRIMMA awards in the US and headlining the BET Experience in Johannesburg together with some select US superstars. He has released three albums so far with the latest being “Touch My Blood”.

Shane Patrick Hughes (popularly now by his stage name Shane Eagle) is another top South African rapper who started his music career at the age of 13 when he recorded his first song at his friend’s studio.

Since then, he’s grown to become a notable figure on the national rap scene, releasing an album and several hit singles including his recent single titled “Gustavo”. He received the Best Hip Hop album at the 24 SAMA Awards which spiked his fan base and made many appreciate his good music.

Also dubbed Mr. Cashtime, KO is one of the few rappers that have been active in the South African music industry for well over a decade. He’s not just a rapper but also a hip hop artist, songwriter, businessman and co-owner of a popular label called “Cashtime Life”.

A former member of Teargas, KO showed style and creativity on his two recent 2-track EP which he made with AKA and Cassper Nyovest, and also boasts a strong following in other African countries, especially East Africa. “Fire Emoji”, a song by KO was one of the top songs that rocked the airwaves in 2018.

Considered an outstanding rap star, Lehlogonolo Ronald Mataboge popularly known as A-Reece is a songwriter, record producer and co-owner of the label, “The wrecking crew”. He courted fame when he released his hit single in 2015 entitled “Couldn’t”.

He has released three albums so far with many successful singles like “Mgani” and “Zimbali” which have received massive airplay across radio stations in SA. He was awarded the Lyricists of the Year at the 2016 South African Hip Hop Awards.

At number seven is another hip hop veteran, Khuli Chana, who has been around for more than a decade and has maintained his stand in the music industry.

A member of the defunct rap group, Morafe, Khuli Chana boasts two studio albums and a couple of singles which have given him prominence as one of the country’s best rappers. His collaboration with Nigerian talent Patoranking in “No Lie” expanded his influence beyond the borders of South Africa into the continent as a whole.

Coming eighth on the list is the first woman on the list, Nadia Nakai Kandava, better known with stage name Nadia Nakai. She has some humble but incredible beginnings including winning the 2013 Mixtape 101 competition which was the first time it was won by a female.

She made it into the spotlight in 2017 when she featured Cassper Nyovest in a single which was loved by many South Africans. She’s one of the few women to succeed in rap music in South Africa which indicates a lot of hard work and persistence.

Mzayifani Mzondedeli Boltina, popularly known as iFani is a South African Hip Hop artist, MC and television presenter. He has two albums to his name with the second album achieving gold status barely 24 hours after its release while a couple of his singles have enjoyed lots of airplay on radio. His upbeat and catchy IsiXhosa tracks and his signature off-beat vintage style has carved a name for him in the music industry.

Die Antwoord is not a person but a group of incredible rappers that have won the hearts of many South Africans via their rap skills. The group has been releasing music since 2009 and have headlines several international tours in Europe and other parts of the world.

The group, which consists of two artists: Ninja and Yolandi Visser, have released four albums so far with a host of hit singles.