Firstly, what is life expectancy?

To simply put, it is the average age that a person is expected to live.

To be more formal, life expectancy is the science concerned with measurements or observation of the average time an organism is expected to live. This is based on the year of its birth, its current age, change in human population and other factors, including gender.

The most commonly used measure of life expectancy is at birth (LEB), which can be defined in two ways. Cohort LEB; this is the mean length of life of an actual birth cohort (all individuals born in a particular year).

This can be computed only for cohorts born many decades ago so that all their members have died.

Period LEB is the mean length of life of a hypothetical cohort. This is based on assumptions, where the cohort is presumed to have been exposed, from birth through death, to the mortality rates observed at a given year.

Other factors used in measuring life expectancy at a given period include the combination of high infant mortality and deaths in young adulthood through accidents, epidemics, plagues, wars, and childbirth, the availability of medicine and other factors. 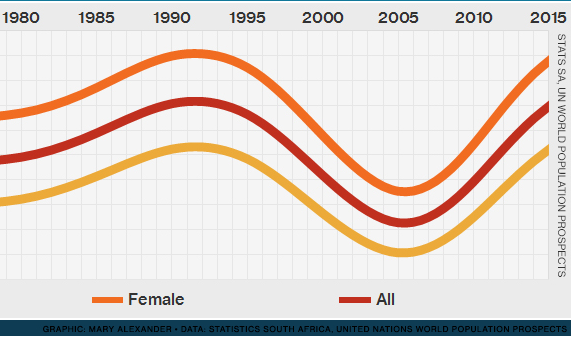 South Africa has one of the lowest life expectancies in the world. Read on to find out why.

According to a report in 2015 commissioned by the National Institute on Aging (NIA), a part of the US National Institutes of Health, most of the world is expected to have their older population continue to grow at an unprecedented rate.

Unfortunately, this would not be the case in Africa and particularly in South Africa. This is due to the prevalence of HIV/AIDS in the country.

The research found that South Africa’s life expectancy at birth was only 49.7 years of age in 2015. While South African men were expected to live a little longer (50.7 years), women got along worse, at 48.7 years.

However, other statistics in South Africa and especially from the World Health Organization give quite different data.

According to the latest WHO data published in 2018, life expectancy in South Africa is:

Male 60.2, Female 67.0 and total life expectancy, 63.6 which gives South Africa a world life expectancy ranking of 153. Although authorities such as the U.S bureau have noticed a turn in the tide as measures taken are acutely decreasing the mortality rate due to HIV/AIDS, it still poses a problem at the present moment.

If the population decline earlier predicted in 2015 by the National Institute of Aging does not go through due to the decrease in mortality rate, South Africa’s life expectancy is expected to climb to 63.2 years of age at birth in 2050. This is still lower than the global average, but higher than many other African nations.

However, the leading cause of death in South Africa is still agreed upon. The foremost of which is HIV/AIDS. Others are road injuries and violence as well as diseases related to obesity.

It is important to note that population aging and long life expectancy is important to any nation. This is because it affects many aspects of public life. These include acute and long-term health care needs, to pensions, work and retirement, transportation, and housing.

While many agree that the life expectancy in South Africa is rapidly increasing, this does not go to say South Africans are living healthier lives. According to Professor Charles Shey Wiysonge who is the Director of Cochrane South Africa, “South Africa is one of the few countries in the world where the number of healthy years that men and women can expect to live has fallen over the past 25 years,”

There is a huge awareness to risk factors in South Africa which have to be dealt with. These include obesity, conflict and mental illness, substance use disorders. These have posed a threat to South Africa and prevented progress.

Excess body fat is associated with a range of health risks. A high body mass index (an indicator of obesity) is the fourth largest contributor to loss of healthy life, after high blood pressure, smoking and high blood sugar. Furthermore, poor diet is also associated with one in every five deaths in the world.

South Africa has made huge improvements in getting people to test for HIV in recent years and is now almost meeting the first of the 90-90-90 targets, with 86% of people aware of their status.

While over the years, the circumstances found in South Africa due to health factors are not encouraging, the country is evidently taking steps towards healthier living and this is expected to make things turn out better for South Africa and her people.