Nokia’s return to the scene is simply what unforeseen surprises are made of and they’re poised to take their place again as a trusted phone manufacturer. Starting by reproducing older models like Nokia 3310, they have gone ahead to step up their game, releasing the Nokia 5 alongside three other devices.

If you’re yet to use any of the smartphones from this reputable brand, the Nokia 5 will give you a satisfying first-time experience. It is particularly suitable for those who want a smartphone they can use without worries and having to spend an arm and a leg. Let’s find out why Nokia 5 is the rave of the moment! 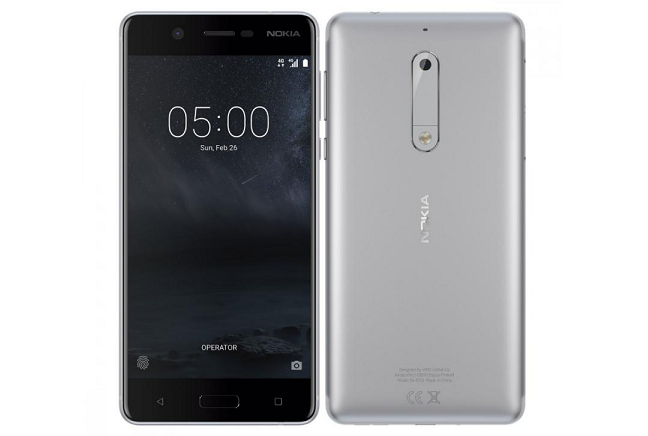 Costing around R2000 – R2600 when it was launched, the price of the Nokia 5 has dropped and it now goes for as little R1800. Be sure to visit two or more outlets before making a purchase as you just might get a fantastic deal.

Crafted from a single block of 6,000-series of aluminium, the Nokia 5 comes in unibody aluminium back and sides that ooze quality. The metal is sturdy and the corners go round to gives the phone a solid feel while still being sleek enough for you to want to hold it in your hands for long. Although the body is made of aluminium metal, the Nokia 5 has just the right amount of weight, giving the impression that a lot of attention was given to make it ergonomic.

Going further, the back of the device is cool to touch and doesn’t feel slippery in the hand. The camera and flash are also positioned on the rear while the speaker is at the bottom of the smartphone, just like most Nokia devices.

The home button (which is also the fingerprint sensor) is positioned just below the display, and the two other navigation keys are placed on its either side. The smartphone is drip resistant with IP52 certification, meaning you won’t be able to take it swimming. Overall, the design and body build is impressive but the sound production from the speakers could have been better.

The Nokia 5 is available in four colour variants namely: tempered blue, silver, matte black and copper colours. Based on previous trends, we expect the black colour units to sell out faster while the few available ones to have slightly higher prices than other colour variants.

The Nokia 5 comes with a basic 720p IPS display that’s quite decent in brightness. At 5.2 inches and with a top and bottom screen bezels, you get a lot of screen to comfortably read emails, watch videos and enjoy gaming sessions. You can even comfortably use the device under bright light as it is vivid and clear. However, the Nokia 5 deserves no award as it falls short of the display specs on the Moto G5.

There are downsides which you should also consider and one of them is that you won’t be able to resize the apps if you’re using the multitasking feature ad might be forced to use the 50/50 screen share. Going further, the Nokia 5 could have been better if it came with an AMOLED screen and it’s easy to notice the absence due to the dullness of the screen to the eye. For the screen, the Nokia 5 is neither exceptional neither is it awful.

The Nokia 5 can last the whole day on a single charge if you’re a moderate user. It comes with a 3,000 mAh battery which is efficiently managed by the Snapdragon 430 to keep the device powered on while you stream from Spotify, play games, watch movies and surf the internet. Sadly, there’s no fast charge technology, so you might need to plug the smartphone into the socket long before you need to go out.

The Nokia 5 boasts two cameras but it’s very unlikely that any will win a photography competition. There’s a 13MP camera on the rear and an 8 MP shooter for selfies which give a good account of themselves only in light conditions.

Apart from their lacklustre performance, the cameras take time to load which means you can’t rely on them to capture timely perfect shots.  Going further, the images are not crisp and detailed, and even the colour reproduction isn’t great, making the Nokia 5 an entirely bad idea for camera freaks who want to upload photos straight to their profiles as soon as they capture the shots.

Powering the Nokia 5 under the hood is an octa-core Qualcomm Snapdragon 430 processor with a speed that clocks at 1.4GHz. The Snapdragon 430 chipset has performed incredibly well in other devices and there’s little doubt you will be pleased with it.

The speed and performance you will get out of it largely depend on the tasks you’re trying to accomplish. For this reason, gamers who want to have a great time without a lag are advised to check out other devices, but on a general note, the processor puts up a decent performance.

Being a low-cost smartphone, don’t expect the Nokia 5 to put a performance that will blow you away, except if it’s your first time using an Android device. Nevertheless, it’s a smartphone that leads the pack in its category as most of the features are top-notch for its level – including the biometric tech which is super-responsive.