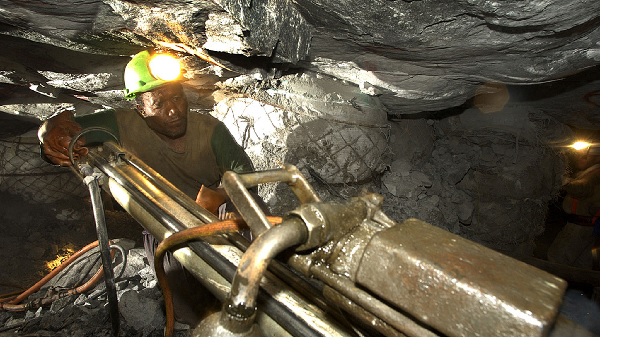 It was in 1852 that the first copper mine in what is now South Africa began operations, laying the foundation for the town of Springbokfontein, which is now Springbok, in the Northern Cape province. In the Eastern Cape, commercial coal mining began 12 years later, with the construction of a mine and the town of Molteno that would be built around it.

There is a long tradition of white Europeans moving to South Africa to set up mining operations, which are staffed by a majority of black workers, which can be traced back to George Vice, an Englishman who was born in the area and named after an Anglo-Italian immigrant who was born in London.

Up until the turn of the 20th century, coal mining continued to expand, with deposits at Vereeniging and Witbank being exploited in the early 1900s.

Due to the unearthing of the 21-carat Eureka diamond in 1861 and the 83-carat Star of South Africa in 1863, the region experienced a diamond rush, aided in large part by the coal industry. A coal deposit was discovered at Leeuwkuil farm in 1879 by English-born George William Stow on behalf of the Orange Free State government, which ruled an area that later become part of South Africa. Stow then moved to Kimberley, where he discovered the famous Big Hole diamond mine.

Around 50,000 miners worked until the mine closed in 1914 to excavate the 215-meter deep Big Hole, which has been described as the world’s deepest hand-dug pit to date. There were still racial disparities at the mine, despite its success in producing 2,720kg of diamonds and helping to establish De Beers, which is still a major player in the diamond industry today.

As governor of the mine, Cecil Rhodes was a white Briton who founded De Beers, while over 1,000 black miners are believed to have died in the mine or from diseases contracted on the job. Over the course of the mine’s existence, more than 5,000 black workers were hospitalized with diseases.

After the First World War, the focus shifted to platinum mining, with the first deposit discovered in 1924. This first deposit, in an area, called Mashishing and has accounted for more than three-quarters of the world’s total platinum output since commercial operations began, according to South Africa Mineral Council.

After the war, there was a lot of growth.

There was a boom in mining in South Africa after World War II, with new uses for minerals and mining products such as platinum in the petroleum industry to improve fuel octane. Witbank and Delmas coal-fired power stations established fossil fuels and mining as South Africa’s primary energy sources. In 1968, Venterspost, Libanon, and Kloof gold mines were combined into a single operation that today produces around 15,000kg of gold per year.

The Second World War, on the other hand, saw a 60 percent increase in the number of people employed in manufacturing. By 1946, the mining industry employed 158,000 people, and 119 unions were formed to represent their interests in politics. When 60,000 African Mineworkers Union members walked off the job to demand higher wages, police shot and killed 12 of them, kicking off a decades-long conflict between mining unions and government forces.

In the second half of the 20th century, the mining industry in South Africa was put under additional pressure by developments overseas, in addition to internal fractures. It is estimated that De Beers’ market shared in the global rough diamond industry which has fallen from 80 percent in 1987 to less than 60 percent by the turn of the century, and to just 35 percent by 2019 as a result of the development of diamond projects in countries like Russia.

After generations of relying on migrant labor, which was influenced by old racial divisions, the industry began to struggle. From 14,000 gold miners in 1890 to 534,000 in 1986, according to a study by the South African Institute of Mining and Metallurgy. Additionally, the mining sector has become less productive for companies as mineral reserves diminish, miners demand better working conditions and itinerant workers return to their homes and families. The percentage of the gold produced by these companies fell from 70% in the middle of the 20th century to 25% in 2004.

Due to South Africa’s apartheid-era policy of racial segregation, mining companies relied heavily on “cheap black labor,” legitimizing the division between white mining company owners and the large number of black workers who worked in the mines on a daily basis.

Many dramatic conflicts have occurred in the mining industry in recent years, ranging from the Marikana Massacre in 2012, when police killed 34 striking miners at Lonmin operations, to the ongoing disputes between the government and the Association of Mineworkers and Construction Union (AMCU) After two major protests, a 70,000-strong strike at platinum mines in 2014 and a nearly 20,000-strong strike at platinum and gold mines, the union is now facing deregistration.

As a result of social pressures, there is declination in extractive industries, and the inability to modernize the mining industry in South Africa, the sector’s future is still uncertain despite its long-standing economic importance.