South Africa is known for its gold deposits which constitute over 50% of the total gold in the world. The interior geography of South Africa is made up of predominant plateaus.

The area towards the east of the Great Escarpment is called the Drakensberg, a mountain range that stretches more than 600 miles. This area plays home to some of the highest peaks in South Africa.

Are you keen on the high mountains in South Africa? You just picked the right post as we will be showing you some of the highest peaks in the country. 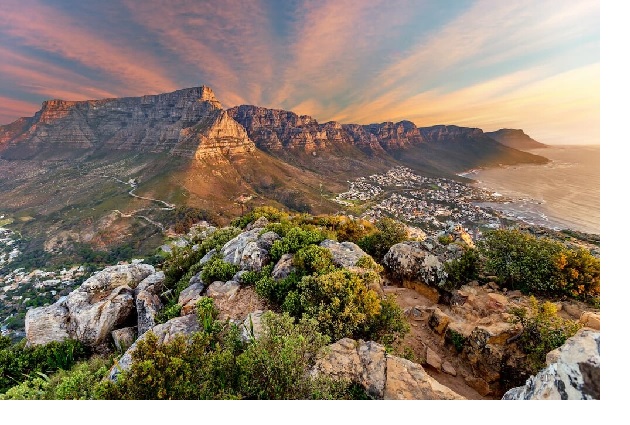 A little about South Africa

Before we go ahead, here’s a little overview of South Africa. When you take a look at the atlas, you will notice that South Africa sits just at the edge of the Southern part of the African map. The country borders the Atlantic and Indian oceans. While its largest city is Johannesburg, the country’s capital is located in Pretoria.

South Africa has eleven official languages, which is one of the factors that make this country unique. Of these languages, the most popular are English, Zulu, and Afrikaans.

Looking at the demographics of this great country, the black population is by far the largest with about 80.2%. After this are the “colored people” that take 8.8% of the country’s population and the “whites” come in a close third with 8.4%. The smallest part of the South African population is the Asian community that forms just 2.5% of the total population.

Mafadi is located right on the border that separates Lesotho and South Africa. Lesotho also has a high peak on the same mountain. Standing at 11, 424 feet above sea level, the Thambana Ntlenyana is higher than Mafadi by a few feet.

Mafadi can be translated to mean “mother to Fida” even though this is still in dispute by the people of Sotho. According to the people of Sotho, they assert that the name Ntheledi means “make me slip.” To them, this seems to be more correct and relevant for the mountain.

This mountain attracts a lot of tourists and hikers all year round. The Ntheledi that runs through the mountain drains into both the Orange Basin and the Atlantic Ocean.

This is the second-highest mountain in South Africa at 11,079 feet above sea level. The Champagne Castle can be found in the KwaZulu-Natal region of South Africa. This highland is made up of mostly basalt rock.

This mountain was first climbed to the peak by Reverend Stocker as far back as the early twentieth century. There are a few subsidiary peaks of this mountain. The four highest of these include Cathkin Peak (the highest), Monk’s Cowl, Dragon’s Back, and Sterkhorn.

You are probably wondering how the name Champagne Castle came about. Two mountaineers, Major Grantham and David Gray ascended to the topmost peak of this mountain, Cathin Gray. Upon their success, they decided to celebrate using champagne. Unfortunately, their guide dropped the champagne bottle on the rock, hence the name, Champagne Castle.

This mountain lies on the Drakensberg Range and is regarded as the third highest peak in South Africa. It is also located in the KwaZulu-Natal Region, around the border that separates South Africa from Lesotho.

This mountain peaks at 10,928 feet above sea level. The locals refer to the peak of this mountain as Khulu which is translated “a peak above 10,000 that has no rival mountain close by.”

Popple peak was named by a mountaineer by the name Barry Anderson after his friend, John Poppleton. Both men, mountaineers, climbed to the peak of the mountain together in 1946. However, when they arrived at the peak, a heavy thunderstorm arose.

As a result, Poppleton left the summit because he was concerned about their safety. Not long after, Anderson sent a survey of the summit along with its elevation. He also suggested that the mountain was named “Popple Peak” in honor of his mountaineering partner.

The wind on this mountain blows at an average of sixteen miles per hour. To accompany this is a daily average temperature of seventeen degrees Celsius. The temperature at night may drop as low as three degrees.

The people of Amangwane also refer to this mountain as Mponjwana. This mountain stands at 9,856 feet above sea level and mostly consists of basalt rock. The first people to ascend to the peak of this mountain were R.G. Kingdon and Basset Smith.

This mountain is very easy to climb for hikers because the sides are not too steep. In fact, if you go by the easiest route, you should be at the peak in about a day.

There are several other peaks within this range like the Twins, the Outer, the Inner Horns, and the Bell. Others are the Miter Peak and the Chessmen Peak.

This mountain makes up one of the highest peaks of the Drakensberg Range. It is made up of basalt as well and rises to about 10,000 feet above sea level. In fact, the highest part of this range is 10,768 feet.

Mont-aux-sources is French for “fountains mountain.” The name originated from some French missionaries who paid a visit to the area sometime in 1936.

A couple of rivers originate from the mountain range such as the Caledon (the major Orange River tributary), the Elands, the Tugela, and the Seati.

Summarized in the table below are the highest mountains in South Africa.