What is not to love about the G63? This is a classy vehicle manufactured by one of the biggest car companies in the world, Mercedes Benz. We all know that cars by this company are always top-notch.

It promises to be an interesting read so let’s get straight to the crux of this post.

Prices of the G63 in South Africa 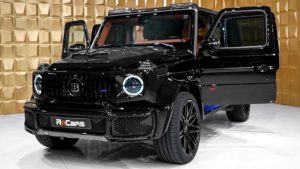 The new G63 is available in South Africa and you can get one from R 2.6 million. This car is very expensive and it is understandable considering that it was just introduced to the market in 2019.

At this point, the previously owned version is very costly and the prices depend on the seller. In fact, a previously used G63 is very difficult to come by in South Africa for now.

Overview of the G63

You have probably heard about the G-Class range of cars by Mercedes Benz. The G63 is one of them and it was introduced into the market in 2019. This car pushes the edges of the premium performance of Benz cars. It mixes this with exclusive styling on both the interior and exterior.

The G-Wagon just got redesigned after several decades. Despite this fact, the company was still able to maintain the iconic design of the G-Wagon howbeit, evolving it a bit.

One of the peculiarities of this car is the off-road capability, it is incredible. However, what stands it out the most is the powerful 4.0 liter twin-turbo V-8 engine. This engine produces 577 horsepower and up to 627 pounds/feet of torque.

It will interest you to know that the car has a nine-speed auto gearbox. The steering wheel is mounted with paddle shifters that powers up the all-wheel-drive system. This ensures better acceleration and handling, especially with respect to rear traction.

If you are looking for a very fast car, then this should be on your list as it hits 60 mph in just 3.9 seconds. It is clear that the G63 is laden with lots of extra power, this is supported by specific AMG treatments. Among these treatments include transmission and suspension tuning.

A lot has been done to improve the interior of the G63 which can be noticed in the different added features. The first thing you would notice is the flared fenders, big wheels, and side exhaust pipes.

Looking at the G63 it is glaring that the changes have made it aggressively luxurious, many of which are very fanciful. The materials used are of premium quality while the gadgets used of high-tech in nature.

Noise is almost not heard in the cabin with the new vibration and noise isolation features added. There is also more space for passengers to enjoy than previous generations of the car. It is expected that a lot more will be put into improving the following versions of the G63.

A few things to know about the G63

Where to buy the G63 in South Africa

If you want a new G63, you can get one from the official Mercedes Benz South Africa website. Here, you can order the car online or find an accredited dealer closest to you. To find a used G63, visit any of the websites of the car vendors in South Africa.

In this post, we have shown you how much the G63 costs in South Africa and why you should love this car. Though the car is expensive, it provides the driver with amazing driving experience.