If there is any vehicle that is crafted for action and adventure, it is the Toyota Fortuner. It is sophisticated on the inside and rugged on the outside. Therefore, it is great for movement within the city or on the roughest topography.

The Fortuner comes with a smart 7-seat flexible seating configuration. This makes a lot of room for family and interestingly any extra gear that you may need on your road experience.

In this post, we take a look at the prices of Fortuner in South Africa. We will also provide you information about what makes the car special as well as a bit of history. 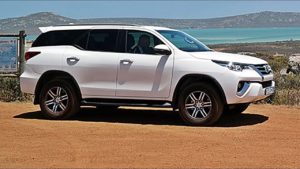 These are the prices of different models of Toyota Fortuner in South Africa.

Some extra info about the Fortuner

Models such as the Crusade come with integrated LED Daytime Running Lamps. The Fortuner has a robust, toughened chassis, which gives it the toughness and endurance.  These are required to take you on whatever expedition that you may want to undertake. It also comes with a road-trip-ready efficiency and powerful 2,800kb braked towing capacity, a power that can take you anywhere.

The Fortuner features the newest 4×4 technology, which is consistently capable of driving on or off-road. It also dispenses exceptional fuel efficiency with instances as low as a record-breaking 8.6 liters per 100 kilometers.

The Toyota Fortuner is armed with a whopping seven SRS airbags. Combine these with an impact-absorbing structure and it gives occupants and the driver confidence and peace of mind while driving.

Talking about stopping exactly when you want, the Toyota Fortuner comes with the Anti-lock Braking System (a safety antiskid braking system used on aircraft and on land vehicles). Added to this is the Brake Assist (an automobile braking technology that increases braking pressure in an emergency). Finally, it has the Electronic Brake Distribution (an automobile brake technology that automatically varies the amount of force applied to each of the vehicle’s wheels. This is mostly based on road conditions, speed, loading, etc.).

The Fortuner also comes with high tensile strength steel sheets and supplementary materials used throughout its body structure. These materials help improve the safety of its occupants. Its roof racks can make it easier to carry extra gear, especially on a holiday. The Toyota Genuine Roof Racks make it possible for flexible storage, allowing you to bring along everything you want for your camping.

The first generation Fortuner was developed by Thailand and Japanese engineers. A number of its facelifted versions, the Hilux and Innova, which were designed in Australia by Toyota Australia. They were also responsible for developing the second generation Fortuner.

This first generation was the bestselling in its category in the Philippines and Thailand. It was unveiled in the 2004 Thailand International Motor Expo.

The Toyota Genuine Premium Steel Bull Bar gives it the rigid and rugged look it has earned. This bull bar is made from high tensile steel for maximum premium and durability in the harshest of conditions.

The Bull Bar consists of I-beam uprights and fabricated steel side sections to produce an added stiffness and a rugged appearance. Its mesh panel protects the radiator from debris. Other variations of the Bull Bar are the Fortuner Nudge Bar, and the Fortuner Bull Bar Winch Open.

The above-mentioned features are only the tip of the iceberg when we discuss all the inbuilt intelligent driver and occupant technologies. It is packed with a pre-collision system, line departure alerting system, and a pre-collision system with daytime cyclist detection. The car also has a road sign assist, plus a host of other safety technologies.

The expertly designed steering wheel comes with several buttons. With these, you can have full control of audio, phone calls and cruise control. The 7-inch display Audio Units of the Toyota Fortuner features voice recognition, wired and wireless connection of devices.

On the new Fortuner Crusade, you can open and close the power back door without leaving your driver’s seat.

Different Market and Variants of the Toyota Fortuner

In Argentina, the Fortuner is assembled in Zarate and sold as the Toyota SW 4. However, in Brazil, it is also known as the SW 4, but with two trims available. The first is the Diesel 3.0 L 16 valve turbo with automatic five-speed transmission.  The second is the Flex (petrol) 2.7 L 16 valve VVT-I five-speed manual and four-speed automatic.

In Colombia, the Fortuner was unveiled in 2005 and then launched in 2007 as a replacement for the locally assembled Prado. The Prado, prior to this, had been under the same production for nine years. It is available as Fortuner Urbana 4 x 2, with a 2.7 L engine, 4×4 with a 2.7 L engine, and Fortuner Plus Diesel, with a 3.0 L turbo engine.

The second-generation Fortuner was released in Australia and Thailand on the same day – 16 July 2015.

The Fortuner uses the “Keen Look” design (slim projector headlights and LED DRL-Daytime Running Lights). This was adapted from the Toyota Corolla.