South Africa boasts some of most delicious and nutritious cuisines on the continent and it’s little wonder the country is home to many food bloggers. Most of them experiment with different recipes to develop their own which they share on their blogs. 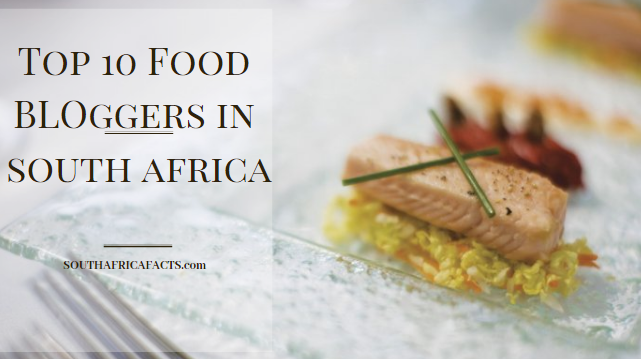 Kamini was an unknown foodie that went through the tremendous pressure to prove herself and she did by winning the Master Chef SA in 2013. The talented and goofy chef has since grown to win the hearts of the foodie community and built a strong followership.

Following her success at the competition, she worked hard to become the “face of food” on magazines, radio and social media. Not leaving out the social media in the pursuit of her dream, she ventured into blogging and has also built a reputation in the food niche. You can follow her on her blog and also her food travel show, “Girl Eat World”, which airs on Food Network, DTSV Channel 175.

IIsle’s story is simple one that combines a passionate interest in food with a wellspring of creativity, and that combination has helped her make a mark in the culinary industry of South Africa. Winning the Fairlady Best Food Blogger 2014 award, Illse has managed the spotlight well and today, she features regularly on popular magazine and life television shows like Pasella.

Illse refers to Pasella as her “personal play pen” because it gives her the opportunity to share her thoughts about her love for food and cooking, review fantastic restaurants and also write about new products and menus. Her blog partners with leading lifestyle blog to create editorial pictures for both blogs.

Cooking her way to the hearts of South Africans, Katelyn is a regular face on Expresso, an everyday breakfast show, where she shows her love for cooking and baking. Her passion started way back when she developed the desire to become a chef at 8 years of age which has now become a reality.

Even away from the bright lights and the camera, Katelyn admits her favourite pastime remains getting creative in the kitchen and trying out the possibilities of combining ingredients – especially the sweet kind. She shares her discoveries on her blog, The Kate Tin which is a beautiful website dedicated to delicious recipes and culinary creations. The blog has won her the award of the “Best Food and Wine Blog” at the South African Blogger Awards of 2014.

A food stylist and food photographer, Nina Timms is a household name in the culinary industry and owner of the My Easy Cooking Blog. Since the inception of the blog, she has shared her recipes and cooking methods on the blog with beautiful photos for illustrations.

The blog, which is a treat for the eyes, is one of the most read food blog in South Africa with an average of 2,500 people per daily visit. In 2012, she was awarded the “Blogger of the Year” by Eat In Magazine. Today, she shares her vast knowledge and passion for the art of cooking with her followers on her blog, her radio show every Thursday morning on Radio Sonder Grense (RSG) as well as via her cooking classes and demonstrations nationwide.

Sarah Graham is a South African food blogger that has found a way to blend her culinary career and her family. Her love for cooking prompted her to release her cookbooks which have been a hit in the culinary industry, with her most famous works being “Bitten” and “Smitten”.

She is the recipient of the South African Food & TV award and also featured in top food magazines including ELLE and Fresh Living Magazine. She interacts with her followers on A Foodie Lives Here.

Alida Ryder is the founder of Simply Delicious Food, a blog she started as a personal project but was later shared with friends and family who live in different cities. That became her springboard for her career as a creative food blogger as the blog grew in daily visits.

Having received significant attention from the public, the blog has become a famous brand in South Africa, donning cookbooks that can be seen in many South African kitchens. She is the winner of the best food and best new blog Awards at the South African Blog Awards 2010.

Welcome to the world of Melissa Delport where it’s all about beautifully styled recipes, reviews, photography and a bit of travel inspiration. It’s hard not to fall in love with her blog, The Truffle Journal, which gives a clue of what dream food heaven would look like.

She’s obviously a passionate foodie because she not only bakes the recipes on the blog; she also tastes them all. As you might notice, her blog indicates that a lot of time went into making sure each recipe is perfectly displayed.

Usha Singh traced the origin of her interest in food to her family where food was always part of the celebration, gatherings and life in general. Staying true to what she has always loved doing; Usha started her Healthy Vegetarian Foods blog which is filled with many tasty vegetarian Indian recipes which were adapted from decades-old family recipe.

Di Bibby is the creative mind behind Bibby’s Kitchen @ 36, a blog that’s best shared with friends and family. Her blog hosts a large collection of recipes which features sweeter foods and some great vegan recipes, all which have been worked to suit modern times. Her cooking classes hold monthly and they’re open for those who want to hone their cooking and baking skills.

Get lost in all the pages of Drizzle and Dip, a popular food and photography blog run by Sam Linsell. A professional food stylist, recipe developer and food photographer, Sam has ensured that her blog caters to all tastes. She is the author of two cookbooks which contain wonderful South African recipes she developed.