The Bugatti Chiron is one of the most expensive road beings to drive the face of the earth. And not only that, it is the fastest and most elegant.

A Bugatti may be a lot of things, but “easy to get” is not one of them. And that is how it is meant to be: high-class and exceptional.

Being with the financial ability to acquire one is the least of your troubles. This is because if you manage to secure a slot to buy one, you should not expect it to arrive before three years’ time. 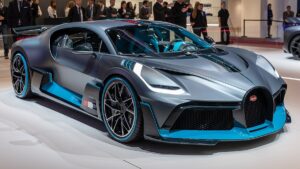 The Bugatti Veyron by the Volkswagen Group (VW) is no longer in production. It was one of the fastest cars until the Chiron 300+ took over. The Veyron was first introduced at the 2002 Geneva motor show, but then production plans stopped. It comes with a 1001 horsepower W-16 engine which gives it a top speed of 252 miles per hour.

The Bugatti Chiron Super Sport 300+ made the record-breaking run that exceeded the magical threshold of 300 miles (482.80 km) per hour for the first time ever in the history of automobiles. It is also known as Beauty and Beast in a New Dimension

The Chiron Super Sport 300+ bodywork has been extended and aerodynamically optimized for extremely high-speed performance. The perfect balance between low drag and downforce improves performance and stability, even at speeds over 420 km/h. The iconic W16 8.0-liter engine now delivers an output of 1.176 kW/1.600 HP, exceeding the Chiron by 100 HP.

The Bugatti Vision Gran Turismo (translated “Grand Tourer”) is a virtual game race car that has been developed due to the brand’s inspiration from their race tradition. It was built in order for Bugatti fans to introduce Bugatti into the virtual world. The design which is based on modern racing technology and aerodynamic analyses delivers engine power of 1,230kW and 1,580Nm to all four wheels. Another interesting feature of the Vision Gran Turismo is that its driver will not need side mirrors because cameras on both sides will show full views on the dashboard.

On 11 August 1939, it marked a turning point in the company’s fortunes. Jean Bugatti, the eldest son of Ettore Bugatti, died while testing a Type 57 tank-bodied race car near the brand’s Molsheim factory in France.

The classic Type 57 SC Atlantic also dubbed “La Voiture Noire” (translated to ‘The Black Car’) inspires the creation of the Bugatti La Voiture Noire 2019. It is called The Black Car because it disappeared at the beginning of World War II

The Bugatti La Voiture Noire 2019 sports 6 insulated exhaust pipes, perfectly positioned mirrors and visibility that is on par with other hypercars. Its bumpers are made of carbon fiber and integrated into the body. It can go from 1 to 4 miles under 10 seconds and its top speed is still to be determined. Other specs to note are its 8.0L Quad Turbocharged W16 engine and a 7-Speed Dual-Clutch transmission which was built by the Formula 1 masters.

The Bugatti DIVO has been termed the most agile and dynamic car Bugatti has ever created. It is a homage for the brand’s 110 years anniversary. The Bugatti DIVO is named after Albert Divo – a former air force pilot and mechanic. He joined Bugatti in 1928 after he began his motorsport career in 1919. Its production is limited to 40 units only. Its technical specs are as follows:

There are hardly any new generation Bugattis in South Africa. This is why social media was agog when videos and photos emerged on October 31, 2019, of a Bugatti Veyron and a Bugatti Chiron touched down at Cape Town International airport. This may be because of the cost and what it entails to own a Bugatti.