Anyone who knows the Audi A7 would anticipate an experience with the 2019 RS7. Audi S and RS models are a range of high-performance versions of AUDI AG. Audi’s dream of carmaking is solely focused on enhanced sports performance of their vehicles.

Audi began producing their racing cars in the 1980s. Examples of its models are Audi Quattro and Audi Sport Quattro. Some of the different variants of these models contained components from Porsche. This partnership enabled the production of the Grand Tourer, also known as 100 Coupe SV3. The 100 Coupe SV3 was equipped with a VH engine, which had the power of 350 hp. 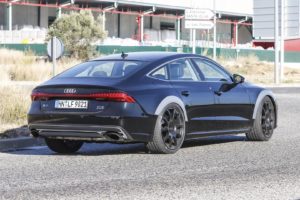 The RS initials in the high-performance version of Audi sports GmbH actually mean “RennSport”, which translates to “racing sport”.

One of the reasons why we say that the RS7 is a high-performance racing sports vehicle is that it can do 0-100 km per hr in 3.4 seconds.

Specs and Criticisms of the Audi RS7

So many fans think that the Audi RS7 is overpriced and that it still has infotainment mistakes such as the A7. But in spite of this, its aggressive appearance will definitely hold your attention. The Audi RS7 has some very impressive performance attributes, along with its hatchback’s added functionality.

But versions have very pronounced with arches, which makes this model of Audi look so aggressive. The wheels come in 21-inch alloys which can be upgraded to 22-inch. They both also come with pronounced side skirts with black carbon inlays, this display makes the RS7 sit lower to the ground than the Audi A7. Apart from the bonnet, roof, and roof lid, the rest of the RS7 design is all new. Also, the RS7 has a new bumper design which makes it look aggressive.

There is extra space for air intake to the engine and an upgraded matrix LED headlamps. The RS7 has a very comfortable interior with the ventilated RS-sports seats with headrests that make for a pleasurable driving experience.

Audi’s RS logos are scattered about within its interior: on the floor, on the virtual cockpit display, on the door. The screen is very easy to customise using buttons on the steering wheel. You will love the infotainment system because it is pretty easy to understand also.

The steering is an RS -sports steering wheel, a bespoke RS-sport display that includes G-meter added with RS- performance. A heads up display also has bespoke RS-dials.

There is a lot of room at the back of the RS7, so tall persons could actually sit comfortably, the backseats is now a three-seater instead of two individual seats in the previous version. There’s a lot of knee room for the passengers in the back, buyers can swap the RS 7 Sportback standard two-seat configuration for a three-seat bench at the point of purchase.

In spite of the fan criticisms of the RS7, its wheels are pushed out 20 mm outwards on its side compared to the A7. This feature upgrade gives it improved handling since its track now becomes 40 mm wideout.

Another fan criticism is that the RS7’s speed is not the mind by its engine. Interestingly, your RSM can go only as fast as you want it when you order it. Its standard speed limits is 155 mph, and can be boosted up to 174 mph and 190 mph using software when you pay.

For less drag, the R7 drops a further 10 mm lower when you go over 74 mph. This suspension feature of the RS7 puts it ahead of the A7.

One of the very interesting features of the RSM is that it comes with rear-wheel steering which makes return the railways in the opposite direction to the front wheels in order to make the driver do tight turns. Hence doing a U-turn will be so much fun.

You can mute the sports exhaust in the comfort mode. The Audi RS7 is a sports car, and its Wheelsandmore exhaust has been designed to complement its proposed.

Fuel Consumption of the Audi RS7 with regards to speed

Where you can buy the Audi RS7 in South Africa

Below is a list of places you can purchase the Audi RS7 in South Africa.

If you prefer buying a previously owned version, you can get one from any of the car sale websites in South Africa.

In this article, we have been able to tell you about the interesting features of the Audi RS7 Sportback Hatchback. We have also shown in the article, the dealers with which you can grab your copy, and their price ranges.